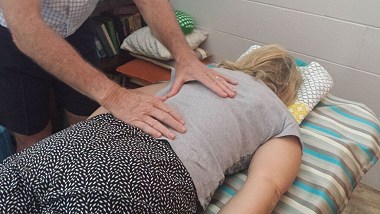 The statements on this page are testimony to the effectiveness of the treatment of pain and the help with recovery from injury that David can deliver with his therapy.

I contacted Bowen Therapist Dave Wharton on the recommendation of my Grandfather due to ongoing problems with my back during twisting and turning. Since problems with my back had persisted 6 months prior to my treatment I had been given pain killers and multiple x-rays on my back which could not determine the cause of the pain. People were starting to doubt that there was anything wrong with my back! During my first Bowen treatment there were noticeable reactions that Dave and my Mother could see. Dave reassured me that there were issues with my back and I had not been imagining them. The spasms and pain never returned after my first treatment, at first I was sceptical about Bowen therapy, but it worked! I attended multiple follow-up treatments to make sure the Bowen therapy and my results held. I have never had a back spasm or pain since the first treatment.

I was injured with a partial Achilles Tendon rupture. This along with hip and back pain prevented me from running. Usually this type of tear would take the best part of a year to heal After seeing Dave for Bowen Therapy the hip and back pain went quickly and I was back running after 3 months. Within three months I was up to doing a six hour run. I went on to compete in a full Ironman the following June and another in December and many other long events, such as Three Marathons in Thee Days , Northface 50 and a hilly 74km Ultra Marathon at Port Douglas, which I would not have been able to do without Bowen. Regular Bowen Therapy as a preventative measure has helped to keep me on my feet doing the things I love the most.

I went to see David at Bowen Therapy after running The Townsville Marathon with jarring pain in my right hip and down the outside of my leg. I didn't expect immediate results but I was interested in what David had said about not rolling your IT band, so was keen to give him a try. I was thrilled with the immediate reduction of pain and continued with Bowen Therapy. I knew I was tired from a heavy racing year but I had a few more races before the end of the year. Six weeks of seeing David and running another marathon I did my fastest 1km rep session ever! This was way beyond my expectations and as I continue with Bowen Therapy I am consistently impressed with the results reflected in my training. A huge thank you to David.

I was getting severe headaches and migraines, severe shoulder/neck pain and pain in the feet/ankles as well as carpal tunnel in one arm which I was told required surgery .All this affected my ability to work as cleaner in a nursing home. At night I would groan from pain when tossing and turning in bed. The Physiotherapist at work said that Bowen Therapy may help relieve the pain and suggested I see Dave at Townsville Pain and Injury Clinic. Dave noticed that most of my pain was down the right side. Pain levels were 8 out of 10 for headaches, 8/10 for shoulder/neck; 8/10 for arm with carpal tunnel and 6-7/10 for foot/ankle. After the first treatment my pain reduced noticeably and the headaches were less and milder. After the third treatment I had no head pain: no shoulder/ neck pain; no carpel tunnel pain; no foot/ankle pain; no migraines but some mild headaches.  At times work is hectic and some pain returns but goes away when I have my monthly preventative Bowen treatment. I have not had to have the carpel tunnel surgery.

My name is Levi Murakami. I used to have pains in my back and neck once I got a tumour removed and they used to make me lose sleep and worry me greatly. A few months ago I discovered Bowen Therapy and it has been a life-changing improvement. My back pain had eased greatly and my neck is improving all the time. I don’t get headaches anymore. Bowen Therapy has changed my life forever and I think that others will benefit from it as well.

My baby boy Alex was 8 weeks old. Alex would wake up after an hour kicking and thrashing and not go back to sleep. We were concerned. Mum mentioned it to her Bowen Therapist, Dave who said there were special Bowen moves for babies that may help settle Alex. After the first treatment Alex slept for 6.5 hours without waking and 4 weeks later continues to sleep anywhere from 6 to 8.5 hours every night. To our surprise he quickly became brighter and more alert. The Therapist also noticed a neck restriction on one side which improved with treatment. The treatment was very gentle and only took a few minutes.

My right VMO disengaged after a bad downhill fall, leading to a general atrophy in the muscles of my right leg, hip and glutes, and an outward bowing of my knee which gradually got worse.

A physiotherapist diagnosed the problem as piriformis syndrome and gave me exercises. I tried Dave Wharton's Bowen Therapy.After one session,the next morning, I woke up and happened to run a hand over my right knee. To my surprise, I found it had changed shape.It was certainly a surprise, but a very welcome one.

I have found it a very valuable resource for long-term posture and muscle-tension problems,with its sometimes almost “instant” results.

Separation of the Pelvis/

In 2002 after childbirth complications I was left with a permanent separation of the pelvis, which gives me a lot of sciatic nerve pain. As surgery was not a viable option after 18 months of rehabilitation I was told that whatever level of pain remained would be with me for the rest of my life. Over the years I have tried many conventional and alternative therapies with some short term success but nothing long lasting. I have known David for many years and we had discussed Bowen therapy but I had some reservations as nothing else I had tried really worked so I had learnt to manage the pain as best I could. After some time I decided to give it a try and the results have been nothing short of amazing. I am a keen runner and Bowen therapy has enabled me to run with the freedom of movement and the lack of pain which is something I thought would never happen again. I have now gone on to run my first marathon. After the success I have had from David Wharton and Bowen Therapy I would recommend it to everyone.

Contact us at the Townsville Pain and Injury Clinic.